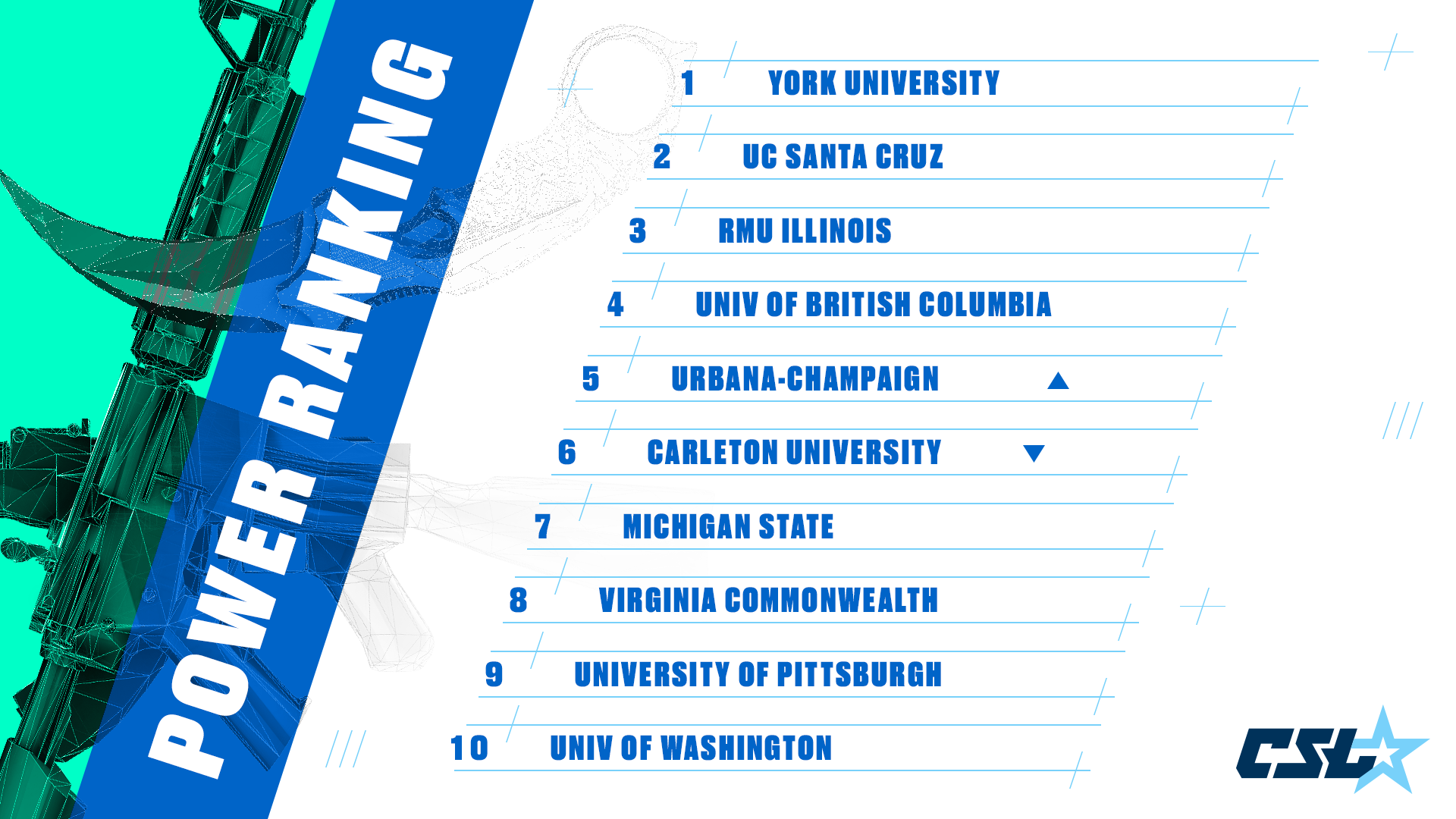 It’s been almost three months since our last CS:GO recap, so we’re taking a fresh look at the standings! Unfortunately, due to a lack of match reports, this list may not be as accurate as it could be. Nonetheless, let’s take a look at how the rankings have changed since last November.

York “peppermint patty” University remains undefeated, leading the way for everyone else. Their winning streak has been going on for 11 weeks and could stretch to 12 if they defeat the University of Ottawa in this week’s match. I’m not in the business of predictions, but if 6-3 Ottawa beats 11-0 York, there will be pitchforks and torches in the streets.

Next up, we have the University of California, Santa Cruz, who are in a similar position to our minty friends above. Both are undefeated and are leading their respective regions (Southwest for Santa Cruz, North 2 for York). Their next match is against fellow beachgoers California State University, Long Beach.

Let’s say I went against my previous statement and did, in fact, get into the business of predictions. If I were to predict which teams would make it to the playoffs, there are a few I’d have my money on.

York, for one, is a no-brainer. These guys are like 2015 Fnatic in the way they’re taking down these teams. If things keep going the way they are, they could very well be champions two years in a row.

Going off of last week’s article, the University of Massachusetts, Amherst is now looking stronger than ever. After taking down University of Connecticut, they’ve bolstered their position in the rankings and are now the only undefeated team in Northeast 3.

Let’s move over to Central 2 and talk about some regional titans. Here we have University of Illinois at Urbana-Champaign and Robert Morris University - Illinois, two of the oldest schools to take part in collegiate esports. They both lead their region undefeated, but their match on February 8th could show us who is really the face of Central 2. I’d argue that in terms of “fame,” Illinois is the underdog, but that could all be flipped if they win that match.

Back in December, the West had two undefeated teams: the University of Washington and the University of British Columbia. On January 11th, that all changed: much like UMass Amherst, Washington took their rightful place at the top of their region. Despite their two 2-1 matches, they’ve been winning consistently, but their next match could prove troublesome as they’re facing the number two team in their region, Arizona State University. Should they win that, they’ll be right on track for an undefeated record.

Don’t count UBC out just yet, though. At last year’s playoffs, they took 4th place after going against some tough opponents like York and Illinois Orange. Sure, they have a somewhat rocky 7-2 record right now, but that might just make them enough of an underdog that they cause some upsets. We’ll have to wait and see.

In the end, of course, these numbers could mean nothing. Last semester, Illinois Orange was 6-1 while UBC was 5-1, and UBC ended up prevailing over them. Sometimes it just depends on how a team is doing that day, and a positive mindset could mean that they shatter everyone’s predictions. That just makes watching the games all that more exciting!

Over in Central 1, Kansas State University took on both the University of Colorado, Boulder and Maryville University. All three of these teams were competing for the top spot in their region, and all were undefeated in December. Kansas managed to defeat Maryville, but they have not yet reported their February 1st match against Boulder. If they defeated Boulder as well, I’d say Kansas also has a fighting chance in the playoffs.

Our last match of the regular season is coming up February 15th. After that, there will be a quick week break before we move on to the Starleague Playoffs. The top four teams from each region will qualify for the playoffs. The top 3 teams from there advance to the live championship, with two teams from the upper bracket and one from the lower.

Tune in to the CS:GO power rankings every week for the most up-to-date standings during this exciting season, and cheer for your team over at our Twitch channel!