Dota 2 Midseason Rankings: A "Shoe"-In For The Playoffs

By Charles "Torrasque" Harrison on January 7, 2020 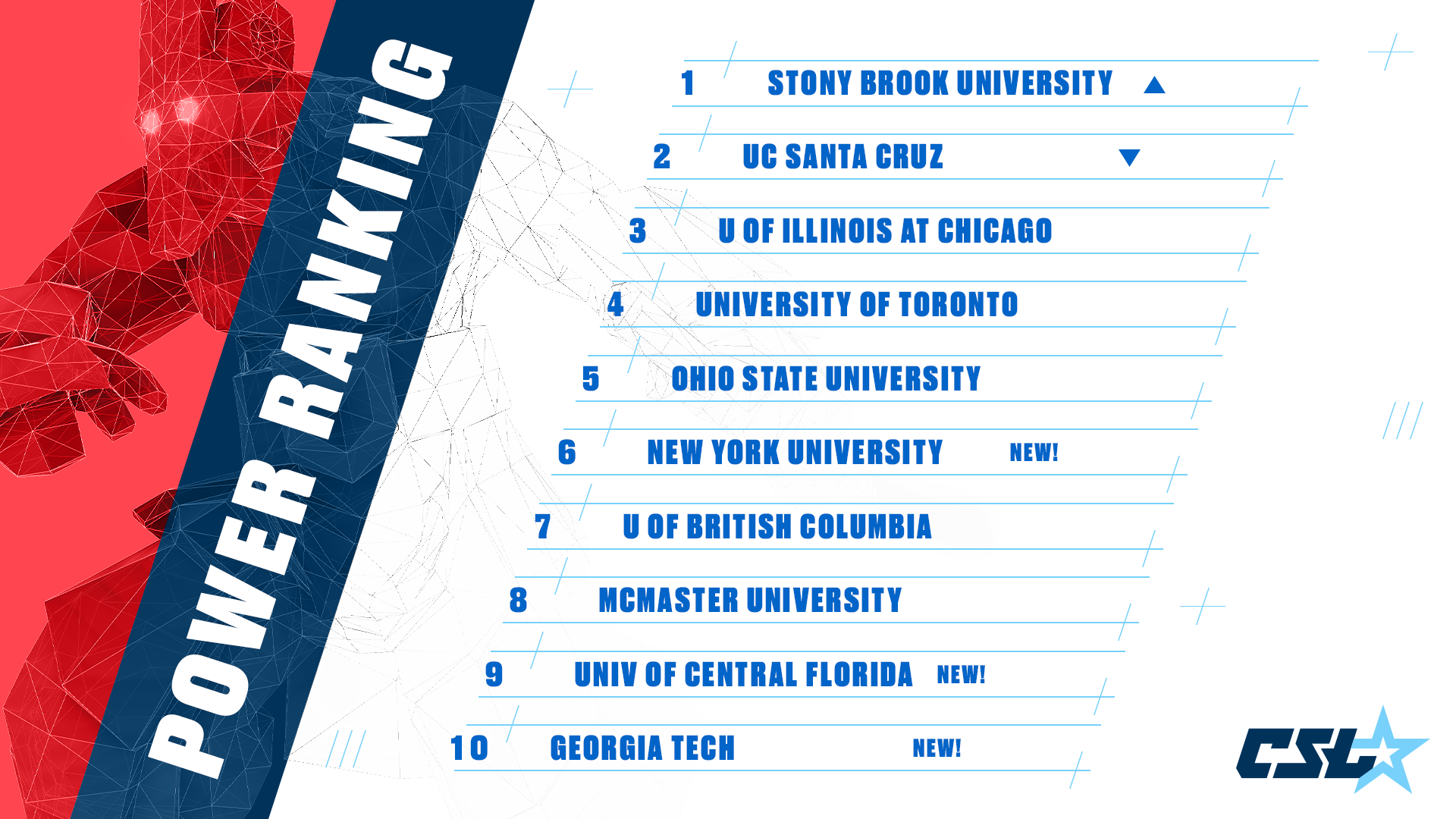 Welcome back to another exciting edition of our incredibly well-thought-out and researched Dota power rankings, where we list the 10 best teams in the league and get bombarded by dozens of players who think they know more than we do. I hope your holidays were restful, because soon it’ll be time to hop back into the regular grind of classes, practicing, playing matches, and all that other stuff that doesn’t matter. This time around, we’re trying something different and getting input from the teams featured on the power rankings before posting them! Without further ado, let’s take a look at the top 10 teams in the first half of the season.

At the top of the list is Stony Brook University. With a dominating 8-0 record, SBU has been a mainstay of power rankings for a few years now. Their coordinator, Nikita “Shoe” Zagrebin, had this to say about the rankings: “So far from the games we’ve had, our ranking looks pretty accurate. We were able to [beat] most of the teams pretty easily.” Very few teams in CSL history can boast a flawless record! It will be exciting to see if the Eternal Kings can maintain it going into the second half. When asked about his team’s performance so far, Zagrebin added, “So far, strong performance. We have a strong hero pool and the new patch doesn’t seem to hinder our strengths in any way, so I think you can expect similar performance[s] later on in the season as well.”

Second on our list is UC Santa Cruz, who are also undefeated so far this season. Coordinator Kyohei “poxy” Ikeda was flattered by the ranking we gave his team, and humbly added, “I think we are about 3-5th place based on our performance and that of other teams.” It was quite refreshing to speak with a coordinator that doesn’t spend every breath hyping up his team’s accomplishments. When asked about his thoughts on the season so far, Ikeda added, “With new players and roles, I believe our team adapted to the new changes very well. I also enjoy playing Dota with my team :)."

Next is the University of Illinois at Chicago in third place. Each time a power ranking is released, UIC coach Michael “gocolts12” Lederer is the first person to comment on them, usually bringing up reasons why his team should be higher. “We totally deserve to be on the list. I think it’s fair to outsiders that don’t watch our team as consistently as I do as the coach, so naturally I think we’re number one,” he said. Despite having played only two official matches so far, this writer and several other players--some of which were consulted for this power ranking--wholeheartedly believe that UIC is legitimately a solid team. Lederer knows very well how others might view his team: “It’s hard to say given our lack of official matches, but from what I’ve seen in officials and scrims, I’ve been very pleased...I think this is the most promising iteration of our squad since we broke out last season, and I’m incredibly excited to see what we can achieve come playoffs.”

Fourth is the University of Toronto, another team that remains undefeated at this point. Esah “Rapboy” Mirza more or less agreed with the rankings, adding, “[They] match up pretty well, we think we’re 3rd basically or at least top 4”. Mirza did have several issues with the power rankings in general, particularly that some groups had more representation than others, as well as concerns about his own group. “Our division is very very easy, so it’s a little difficult to gauge other teams’ performance. My team is all amazing, they’re so good.”

Fifth is The Ohio State University. While unavailable for comment, tOSU’s spotless 5-0 record speaks for itself. Ohio might not be as historically dominant as RIT or SBU, but they’ve been a solid team for the past year. They were eliminated in the playoffs last season by RIT, who I may remind you went on to win it all. It goes without saying that a team that’s strong in the first half of the season may not maintain that dominance in the second half of the season. Even though our format has changed this season, patch 7.23 shook things up so much that it wouldn’t be surprising to see a team as good as tOSU plummet. I don’t expect or hope that tOSU has trouble in the coming months, but we’ll just have to see.

Hanging out in sixth is New York University. Jeremy “yiran” Yang also had several issues with the rankings, mostly involving the methodology that went into creating this list, but after talking with him for some time, we came to an understanding. “I think we should be higher because we are stronger than some of the teams above us. The problem is it’s unfair because we had to play SBU. I think we should be 3rd, but at [the very] least 5th,” he claimed. After accepting the ranking we gave his team, Yang gave some closing thoughts: “I think we’re skilled enough to not get dumpstered by SBU. We won lanes but some of our players don’t practice enough. Most teams like to be overconfident in their estimation, so I’m sure many others would say this, but I think we have a decent shot at winning and SBU/UIC are the only other teams that can win [the Championship] in my view.”

Seventh is the University of British Columbia, a team that has gone through many changes this year but appears to have remained intact and potent. UBC coordinator Peter “Panders” Anders was content with his team’s ranking, saying, “The team has a lot of potential that they have been growing into naturally, not trying to force anything too hard. Overall the team has built a very strong foundation of understanding the game and coordinating between players. I can see them performing quite well in the rest of the season.” Quite a vote of confidence!

Next is McMaster University in eighth. Though they were unavailable for comment in this busy holiday season, McMaster remains yet another team that has been a mainstay of the playoffs. Last season, McMaster was eliminated in the first round of the playoffs by the University of Maryland, College Park. They had a significantly better showing in the 2017-2018 season, making it to LAN finals only to lose 2-1 to RIT in the quarterfinals. It should be noted that McMaster is one of the only teams to take a game off of RIT that season, which was arguably when RIT was their absolute strongest. Mirza’s earlier comments about the easiness of his division might bring McMaster’s skill into question, but they could always make a comeback and put the haters to rest.

Ninth is the University of Central Florida. Evan “xdwayoflife” Amato, coordinator for UCF, had this to say about his team’s ranking: “I think [ninth is] a pretty fair representation of our place in the league.” He also mentioned that he “talked to and scoured the game and ranks of some of the higher seeded teams, and they clearly practice and have established team chemistry. I think we deserve to be on this list, but only barely.” When asked about his team’s performance so far and future prospects, Amato said, “We’ve performed to expectations and have had a fairly easy schedule thus far. I am ready for the reality check of top-of-group opponents and playoffs. We are sloppy but of high individual skill.”

Concluding this list in tenth is, of course, the Georgia Institute of Technology. Georgia Tech has been a playoff regular for three years now, which already puts them into a pretty exclusive club. Even though they were unavailable for comment, this writer feels like the players of Georgia Tech have earned CSL jackets or something along those lines. As they are the last of the undefeated teams, Georgia Tech will undoubtedly make playoffs this season, but no one can say if they’ll be able to make LAN finals. Good luck lads: you have a tough road ahead of you.

I’d like to thank every coordinator that took time out of their holidays to speak with me right before Christmas. If you have any comments or would like to inquire about this list’s methodology, you’re welcome to ask in our Discord channel.