League of Legends Winter Power Rankings: In For A Thrashing

After months of action, we’ve arrived at the halfway point of the League of Legends CSL season. At 6 games in, we’re already seeing some teams struggle to stay in the race and others soar to the top of their divisions. To give you an idea of where we are in the season, we’ve made a list of the top 10 teams so far this year. With many teams still undefeated, this list was not based only on current record: teams’ overall ranking in solo queue and their strength of schedule were also taken into consideration. Without further ado, here are the top 10 League teams in CSL! 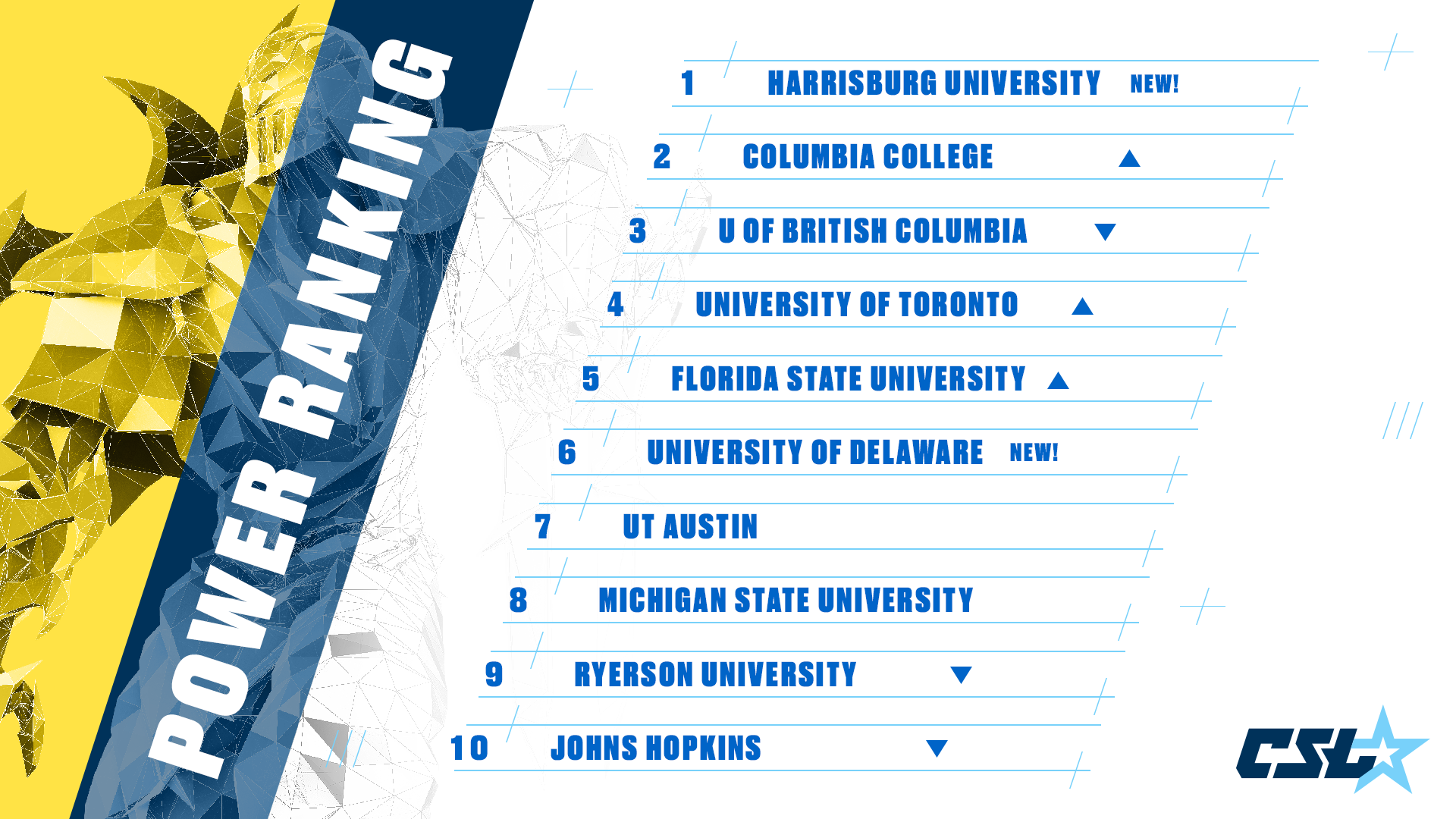 With a history of success and an undefeated record, it shouldn’t be a surprise to see Johns Hopkins University on this list. Although not the highest-ranked team, the university still has very successful players like 25th Sol and NytesDawn, both of whom finished the 2019 season in Masters. Johns Hopkins’ past success should put fear into the hearts of their opponents, and they will almost certainly finish at the top of their division (East 1). Though they didn’t make it to the live finals last year, Johns Hopkins certainly has the teamwork and strength to go the distance.

Ryerson, like Johns Hopkins, has a history of success and talent that merits their position on our list. Though they never placed quite as high as Johns Hopkins, Ryerson has always been near the top of the playoffs list, and it looks like they’ll be there yet again this year. Consistency is easy for Ryerson, but whether they have enough skill to push into the upper echelon with their current roster is yet to be seen. There is no question that this team will be in the playoffs, but whether they will be a real contender is still up in the air.

Michigan State University, unlike the previous two teams, sits at a perfect record: not only are they 6-0 (like every other team on this list), but they also have a solid 12-0 game score. Although Michigan isn’t facing the steepest competition in Northeast 2, going 12-0 in CSL is a feat not many teams can do (including the #1 team on this list)! They may not have the strongest team on paper, but Michigan State is absolutely a team to be feared going into the second half of the competition.

Just like Michigan State, the Longhorns also have a clean 12-0 game score. The University of Texas at Austin has been on our power rankings the entire season! A superb team puts them in a prime position to take first place in South Central 1; however, they have yet to face the other two undefeated teams in the division, moving them a little lower on the list because of the competition they’ve faced. If they’re able to win against San Antonio and Houston, UT Austin will definitely move up this list and could be one of the favorites to win it all.

Like UT Austin, Delaware has yet to lose a single game, but they also had to go through a strong Rutgers team to get there. Delaware also has a slightly higher average rank than Texas at Austin, which is why they are a spot up on them. Delaware has continued to impress me this season--I always seemed to underestimate them quite a bit. They’re poised to place first in East 2, and then it’s on to the playoffs, where they’re definitely in a good spot to go far.

FSU is yet another team that sits at 6-0 with a 12-0 game score. (Hopefully this shows why average rank had to be used and how close some of these teams are!) They’ve had some immaculate victories, and they outrank every team below them. FSU handed the University of Alabama - Huntsville their only loss of the season, and if they can take down UNC - Chapel Hill in January, they will all but secure first place in Southeast 1. The teams from here on out are very high-ranking solo queue teams.

The University of Toronto is another team very familiar with our power rankings. Toronto has a clean 12-0 game score, which they earned taking down some pretty successful teams like the Universite de Montreal, who placed 3rd in last year’s playoffs. There’s no doubt in my mind that Toronto will finish first in Northeast 7. Watch out for this team, as it wouldn’t surprise me to see them go far in the playoffs. Even so, Toronto still pales in comparison to the absolute powerhouse teams that make up the top 3.

Don’t let that one game loss fool you: this team is extremely good. Their only loss came at the hands of Simon Fraser University, another extremely talented team that almost made it onto our top 10. UBC has some of the best players NA has to offer, including Kazahana, who you’ll always find on the challenger leaderboard. Unfortunately, UBC does have a few weak spots on their roster that puts them at #3. Regardless, this team is a powerhouse that has the history and the players to take them to the finals and win the championship.

#2 on this list is the one and only Columbia College. With an average rank of grandmaster, this team is obviously extremely skilled. Columbia College has long been a very strong esports university, and they are no slouch in League of Legends. Just one look at this team shows the skill evident on their roster: challenger players like MistyStumpey and Rovex play on Columbia College’s team. They’re nothing to mess with, and it would be a pretty big disappointment for the organization if they didn’t make it extremely far in this year’s playoffs.

The one and only team with an average rank of challenger belongs nowhere else than at number 1 on our fall power rankings. Coached by ex-TSM support Xpecial, all of these collegiate players are near the top of the solo queue ladder. Skilled players like FrostForest, Teesum, and Ran are all very skilled players. This team has been stomping the competition, and it certainly doesn’t look like they’ll be stopping anytime soon. This team’s goal should absolutely be the championship win, and aside from other top-tier teams like UBC and Columbia, Harrisburg looks almost unstoppable.