League of Legends: The Big Three

After five months and 11 weeks of competition, this year’s regular season has finally concluded! This year, we have a ton of extremely talented teams, and with the playoffs starting up soon, it’s a great time to reflect on three teams in particular. Columbia College, the University of British Columbia, and Harrisburg University of Science and Technology stood out among the rest this year in terms of pure roster strength and teamwork. Just looking at their rosters is terrifying, and watching how they stomped through their respective regions proved just how strong they are. These teams haven’t played each other (yet), so let’s break down their rosters and see who is truly the best CSL has to offer. 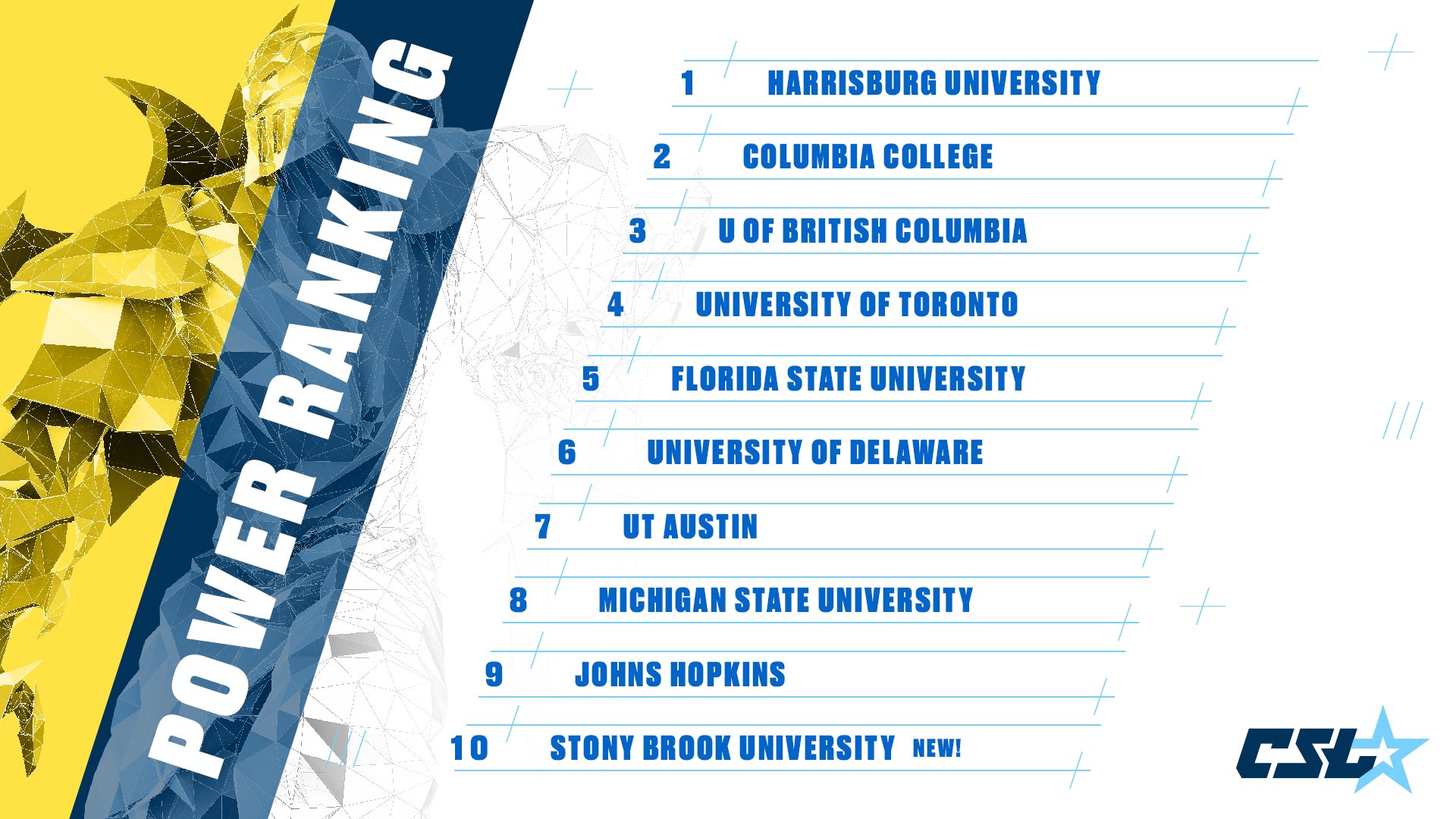 These talented top laners have a few champions in common, but for the most part, they pull from different champion pools. Let’s start with I E, the top laner for UBC. Despite currently only being Diamond 3, he finished last year in Grandmasters and is obviously a talented player despite a big slump. I E is a carry player through and through, picking up characters such as Tryndamere, Irelia, Jax and Camille. This guy is the ultimate “1v1 me bro”.

MistyStumpey is a popular name in the League community. Misty is not a 1v9 hard carry type player like I E; instead, he plays reliable, tanky frontline champions. Unlike the other two top laners on this list, Misty has dabbled in some Sona top lane, which has begun to arise in solo queue. I’d definitely watch out for MistyStumpey: it looks like he’s got a pretty strong champion pool, plays very reliably, and even has a few pocket picks he could pull out.

Finally, we have lxwrence. This guy is the middle ground between I E and MistyStumpey. He has a few carries he likes to pull out, notably Akali, Lucian and Irelia. However, he also plays a mean frontline bruiser, with insanely good winrates on both Mordekaiser and the newest champion Sett.

Overall, I’ll give the top lane advantage to Harrisburg. Both lxwrence and MistyStumpey are extremely solid and highly-ranked players, but just from the match histories of these two, lxwrence definitely gets more practice time in and has a much larger champion pool than MistyStumpey.

If you’ve played League of Legends for long enough, you’ve almost certainly heard all three of these names. ShorterACE is the jungler for Harrisburg, and like most solo queue junglers, he loves aggressive, early-game junglers. He plays Lee Sin, Elise, and Rek’sai across the board. If ShorterACE can be backed up by some strong laners (which he usually can), he can absolutely take over a game single handedly with his picks.

NintendudeX is a former professional LCS player. He hasn’t played very much recently, though the few games he has played have been excellent. Not much needs to be said about Nintendude; he was one of the first pro junglers on the scene and has remained highly ranked since the beginning.

Finally, we have Kazahana, the helm of British Columbia. Although only Diamond 1 right now, Kazahana has been constantly at the top of the table skillswise for his entire career. Kazahana does not even touch Lee Sin or Elise, making him nearly the opposite of ShorterACE (though he is a big Rek’sai player). Kazahana has a very diverse champion pool, including champions like Karthus, Graves, and even Xin Zhao.

In the jungle, I’m giving the advantage to British Columbia. Kazahana has been a solid player for years and has been one of the staples of this UBC organization for a very long time.

Let’s take a look at mid lane. Starting again with Harrisburg, we have LikeaMaws. LikeaMaws finished grandmaster last season but has slipped down to diamond 1 since then. Even so, there’s no doubt that this talented player will be able to rise back to the top. The best thing about LikeaMaws is his huge champion pool. Whether it’s control mages like Ryze or Orianna, assassins like Akali, or just straight meta champions like Sett or Pantheon, this guy can play it all. Although not as highly ranked as Rovex, LikeaMaws’ wide champion pool makes this player very difficult to draft against.

Rovex is a very well-known name in both the collegiate League community and the game’s overall community. Rovex’s home is at the top of challenger, and he terrorizes the mid lane in order to get there. Rovex is a master of the laning phase, but they’re not afraid to roam around and help their team out, either. Rovex plays kill heavy champions like Qiyana, Lucian and Akali who aim to snowball the game out of control. Rovex is definitely a feast or famine player; fortunately for Columbia College, they end up feasting most of the time.

Pros is a lot like LikeaMaws. Although not ranked as highly as Rovex, Pros also has an absolute champion ocean. Syndra, Akali, Zoe, Leblanc, the list goes on and on. If you can name it, Pros can play it.

For the mid lane, I’m going to give the advantage to Columbia College. Rovex is an incredibly talented mid laner who is constantly a high challenger.

So far, we have one point to Harrisburg, one point to Columbia College, and one point to British Columbia. Our bot lane and support picks will be what determines who has the overall strongest team.

Tomo9 is an extremely talented ADC. He has an 80% win rate and a 3.55 KDA over his last 20 games. He’s been playing all of the meta champions like Senna, Miss Fortune and Aphelios. Overall, his win rates and champions played show a solid ADC.

Up next, we have SpØØky. As an ADC player myself, I’m going to level with you guys: all ADC players are the same. Just like Tomo9, SpØØky plays mostly MF, Aphelios, and Senna. Although he doesn’t have as high a winrate at 55%, he has a better KDA at 4.11.

British Columbia’s ADC is Lyze. Unlike Tomo9 and Spooky, Lyze has been spamming MF recently, with some mixed success.

For the ADC role, I’m going to give a tie to Harrisburg and Columbia College. Both of these ADCs are challenger-level players, play similar champions and have a similar KDA. Unfortunately, Lyze is a little too low rank at Diamond 2 to make the cut.

Next, we have the famous Papachau. Papachau has been a very famous player for quite a while and has kept his skills sharp by playing at the top of the competitive ladder. Currently, he has a bit of a mixed champion pool, playing champions such as Senna, Thresh, Alistar and Yuumi. Papachau has a diverse playstyle that will benefit his team immensely.

In this final battle, I’m going to pick Teesum from Harrisburg. It was a close one between Teesum and the legendary Papachau, but Teesum’s higher rank is what gives him the edge.

Based on the final results, Harrisburg has the most talented roster, Columbia College arrives in 2nd, and British Columbia completes the list at 3rd. In reality, all three of these teams are extremely talented, and any of these matchups would be a very close and competitive best of 5. These three teams are definitely my favorites to win CSL. With the playoffs starting soon, be sure to keep your eyes on these three incredible schools!