GameStop Weeklies are Back in 2020!

The modern twenties are here! Now that the year has officially kicked off, we’re announcing the return of one of our newest leagues: the GameStop Weeklies!

Originally introduced during the latter half of 2019, we wanted to give students a new way to get involved in the CSL. The GameStop Weeklies are one of the ways we want to do just that. Because of this, all of our biggest titles are available! 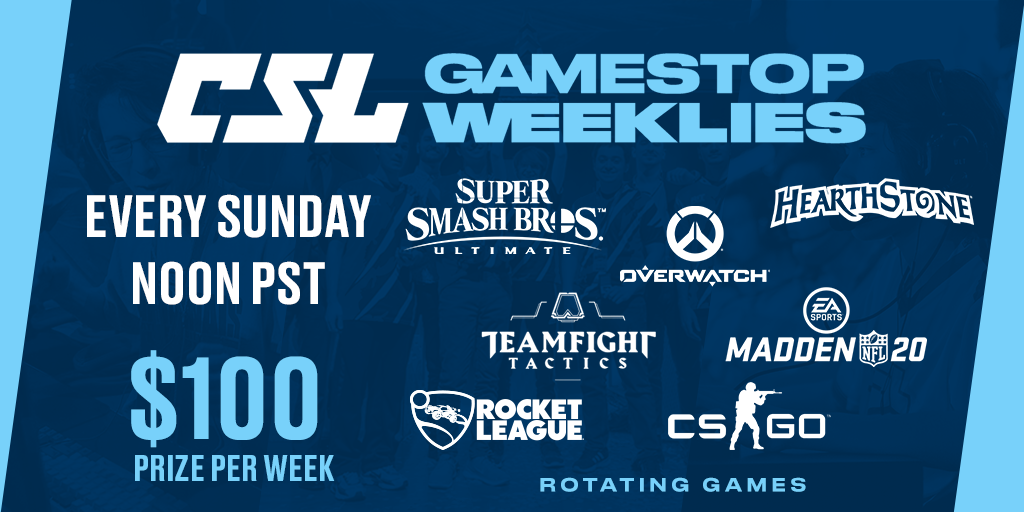 Do you like playing CS:GO and League of Legends competitively? Now, you don’t have to pick a side and make one of your friend groups slightly angry. Did I mention these events have… cash prizes? That’s right! Not only do you get to play with your friends and avoid the–"exciting” and totally not frustrating–world of your favorite game’s ranked ladder, but you also have the chance to win $100 every week!

Vote for your favorite clip in our @GameStop Weeklies Highlights Contest!

The winner will receive $100. Cast your vote in our Twitter poll below, and stay tuned for more FREE #GameStop Weeklies tournaments starting again in January 2020! 🎉 pic.twitter.com/7uk3vBjInk

While I could keep hyping this up all day, I think it’s better to see what some of the past competitors think about competing in the GameStop Weeklies. I had a couple of quick chats with the Madden winner from the University of South Dakota, Jackson Crist, winner and member of the Rocket League team at the University of North Texas, Alexander Wang, and finally, four members of the CS:GO team at Virginia Tech: Alex Dziarnowski, Gavin Ko, Connor Hartman, and Benjamin Mauldin.

The interview below has been edited for brevity and clarity.

What was your favorite part about competing in the GameStop Weeklies last year?

Jackson Christ: My favorite part was having the opportunity to represent my university and the state of South Dakota in something I excel in. It was also really cool to be playing against other students from all over the United States.

Alexander Wang: I like having another league to play in. I think it’s a great way to practice and build up a mindset of constantly grinding.

Gavin Ko: It was great playing against some of the top collegiate players in the country, especially since I was able to do that with my best friends.

Alex Dziarnowski: It was an intense and fun experience. There aren't many opportunities to play against great players within the collegiate scene. I do think the GameStop weeklies are a good way to do so.

Do you plan on competing again this year?

Jackson Christ: Definitely. I plan on competing in every GameStop Weekly I can for Madden in 2020. I love competing and have no plans on stopping any time soon.

Alexander Wang: If the timeslots line up, I’m 100% interested in playing. I’d also like to see some more elite teams sign up like UoA or LSU. It would be great to bring rivalries from CRL to CSL.

Connor Hartman: Yeah, I plan on competing more because the level of talent is phenomenal and the gameplay is structured and represents how CS:GO is truly meant to be played.

Are there any changes you’d like to see made to the format this time around?

Jackson Christ: The only change I would like to see is more advertising of the Madden events. The more competitors, the better! I really hope to see these CSL Madden events grow in the future.

Benjamin Mauldin: Playing on ESEA scrim servers and in Faceit hubs feels suboptimal at times. The servers definitely feel better than when we were on CEVO in the past, but the platform doesn’t feel as connected to CSL as we’d like. Mostly because the two aren’t really integrated together so it necessitates reporting on matches through screenshots and talking between coordinators for match scheduling. Collegiate esports is still in its infancy, though, so I'm very excited to see how things change and grow!

Jackson Christ: [At USD] the esports club is hosting a major fighting game tournament on April 11th. There might also be a few PGR ranked Smash Ultimate players attending, too! Other than that, we’ll continue to compete in the CSL this year.

Alexander Wang: [At UNT] we’re just about to finish our second year of the program so I’m really excited for the future. I’m hoping to finally bring home that Collegiate Rocket League trophy to Denton this spring.

Benjamin Mauldin: [At VT] there’s a ton of big changes in the works concerning VT Esports, but I think I’ll keep those plans under wraps for now!