Collegiate StarCraft fans, rejoice! It’s time again for another top ten list. In this article, I will be ranking the teams based on two very similar sets of information. First, their plot armor: if I were writing this story (and I am), these are the teams that would succeed. Second, their chances of advancing. Fortunately, I’m a fair weather fan, so “who I want to win” lines up nicely with “who I think will win”. 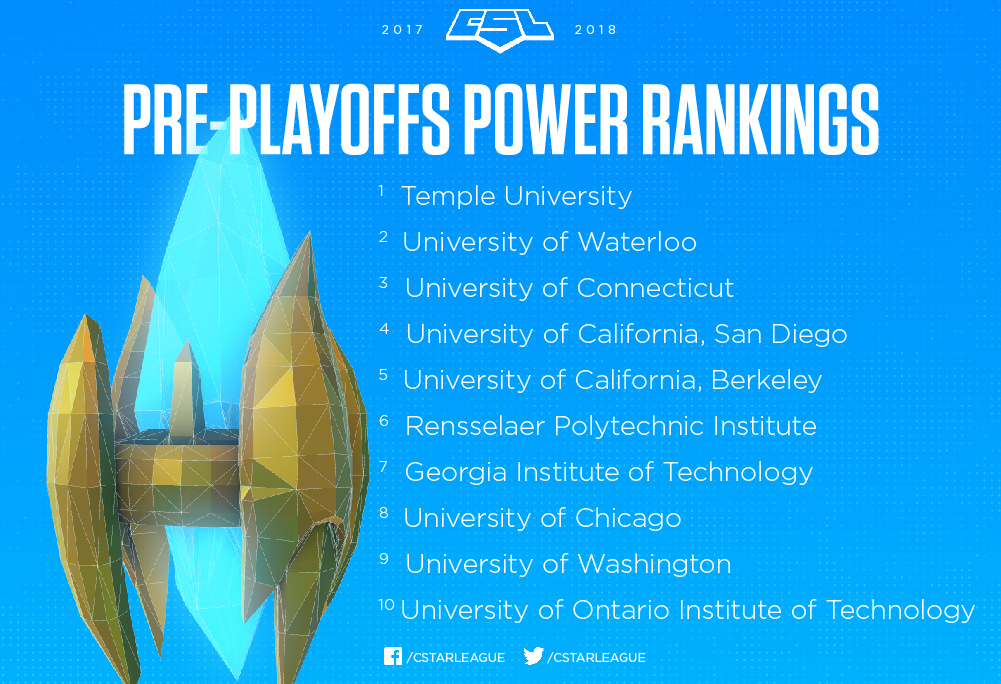 10. University of Ontario Institute of Technology

Sitting at number ten, UOIT is not a team in which I place much hope. That said, they are on the list and we should still be proud of them. They did manage to beat UT, Austin without relying on Jason “Jason” Papadimitrios in the ace. So even with the university’s long, unwieldy name, we should still be proud. Good job, University of Ontario Institute of Technology. Good job and good luck in the playoffs.

UW’s second group stage performance was solid, even if their group wasn’t a particularly strong one. On top of that, they’ve been around for a while. This much is true. But, anyone who says this team isn’t past their prime is wrong. Despite that fact, I believe it is possible, though unlikely, for this team to perform decently enough to make it to the second round.

Unfortunately, I’ve never met Chicago’s Kevin “omgabanana” Yu. But if I ever do, I’m going to buy him a banana and I really hope he’ll say the right words (see: his username). Because Chicago beat Waterloo that one time, the team has won my favor. As such, here they sit on the power ranking. They also happen to be better than the ninth and tenth best team...

Georgia Tech’s Derek “TheoRy” Travisano has been around the CSL so long that I don’t even need to check Liquipedia to know that the ‘R’ in his name is capitalized. I hope Travisano and the Georgia Tech team can make something work during these playoffs, then I can keep correctly capitalizing “TheoRy” for a few more articles.

You might think I’m nuts for placing RPI this high on the list. I have no problem with the diagnosis, but the reasoning needs work. This is my insurance policy so that when Jarod “JonSnow” George carries his team deep into the playoff bracket I can say, “I told you so.” Don’t say I didn’t tell you so (and if it doesn’t happen, don’t say I did).

“Unstoppable,” “A legacy like no other,” and “They can’t be counted out,”  are all things I would have said about this team in most other seasons. These days, I’m sticking with the last two, but not much else. If anything, I think Berkeley is pretty “stoppable” this season.

UCSD lost to RPI, which is pretty significant in my mind. Not significant enough, however, to seriously damage their ranking on this list. I still think it’s wrong (and perhaps a bit absurd) that there’s a UC team that’s better than Berkeley, but it’s 2018 so I really shouldn’t be surprised by anything in this day and age.

I’m a hack and I like these guys so they’re sitting at rank three. More seriously, they put in a lot of work and, in my unbiased opinion, have really earned this spot. Also, if they do turn out to make it far, we get to see Dylan “printf” Ramsay cannon rush almost everyone. I’m really hoping to see a rematch of last year’s round of four game that featured Ramsay and Temple’s Robbie “Tesla” Plata.

But, muh narrative! I write this unabashedly, Temple’s Robbie “Tesla” Plata is my favorite player in the Collegiate StarLeague (and has been ever since Austin “Sugar” Kim graduated). There are two main reasons for this. First, he plays Protoss. Second, he gives great interviews. Conan “Suppy” Liu is also on this team.

That’s the last top ten list you’ll have to read from me this season. But, be sure to look out for next week’s article about my (more specific) predictions for how the bracket will play out! Hint: I’m sticking to my season-long narrative.

Be sure to tune in at 7pm PT/10pm ET on Tuesday for SC2 action and on Thursday for SC:R action over at Twitch!