The start of the 2018 Collegiate StarCraft playoffs is right around the corner. The post-season will get underway next Tuesday, March 20th. To mark the occasion, I’ve filled out a playoff bracket. I’ve also provided my commentary on some of the matches below. Make sure you fill out your own bracket and tweet them at @CollegiateSC or me, @TylerTheGloob (you can find a blank bracket here). 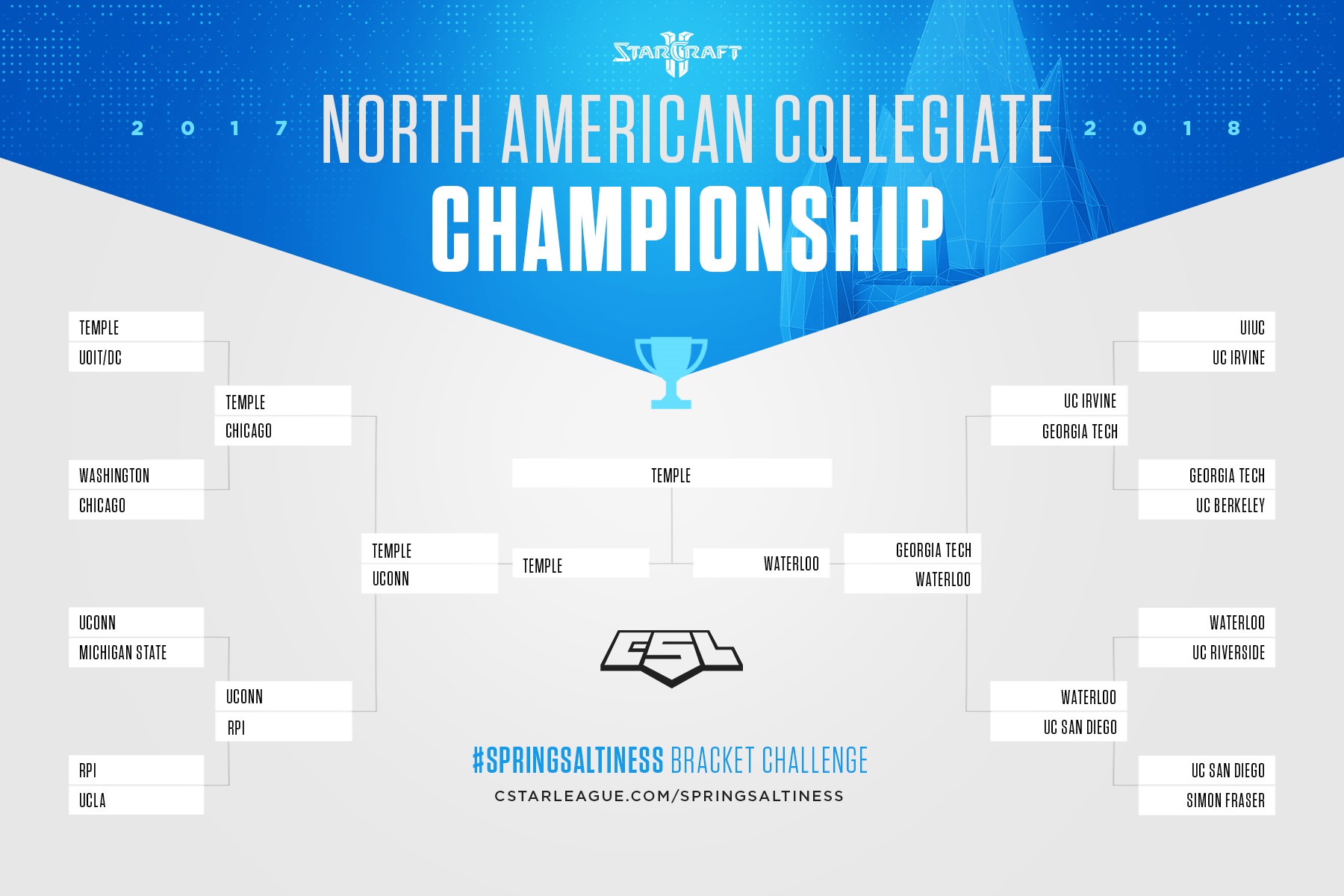 Here are my predictions. I’m sticking with Temple this year.

Some of the matches in this bracket will be stomps. However, a few of them should be quite competitive (or at least a little competitive). To begin, I think University of Washington versus University of Chicago should be a good match. Keep in mind, I’ve been on the Chicago hype train ever since they picked up that win against Waterloo. Unfortunately, the result of this series isn’t particularly important because the winner will be losing to Temple in the next round.

It’s likely that Temple University will meet University of Connecticut in the round of four again this year. While Temple’s roster will be a bit different for the rematch, Connecticut’s remains the same. Obviously, I expect Temple to win. That said, I really wouldn’t be that surprised if Connecticut made something happen. There were some very close matches in their series last year and I know Connecticut will be looking to flip the script this year.

Located on the other side of the bracket, Georgia Institute of Technology versus University of California, Berkeley is another series I’m looking forward to. Anyone who was around in 2013 might recognize this as a rematch of that year’s grand finals. The teams have changed considerably since then, but I’m excited to see these old legacies face off. Fun fact: Georgia Tech’s Derek “TheoRy” Travisano was playing for the school back in 2013, too.

The last matchup I’m excited about is University of Waterloo versus University of California, San Diego. I’m fairly confident that Waterloo will advance past San Diego to the round of four and, ultimately, the grand finals. Regardless, San Diego has a solid team and I’m prone to being wrong. At worst, I think this series will showcase some of the highest level play in the league.

Be sure to tune in at 7pm PT/10pm ET on Tuesday for SC2 action and on Thursday for SC:R action over at Twitch!